Over the last two seasons of triathlons I’ve done a lot of sprints and oly’s but the step up to half-iron distance is significant, no messin’ around if you want to be competitive. It also a race that requires a certain amount of pacing, nutrition planning and self control since it is a 5+ hour race that cover 1.2 mi by water, 56 mi by bike, and 13.1 mi by foot.

The Raleigh 70.3 race was the first, I think, Ironman brand race in NC.  And they have created quite a brand. This race sold out within a month last fall compared to most HIM-distance races put on by local groups rarely sell out.

On to the race.

The swim was off Vista Pointe in Jordan Lake.  The water was 76 deg and the cutoff was 76.1. As a former analytical chemist, I wonder what kind of accuracy they are using or is it about customer satisfaction. A bunch of people did not even bring their wetsuits figuring it was going to be non-wetsuit legal. The other oddity, based on some lake regulations, was that no practice swimming was allowed. I was lucky to get a fourth wave which meant less waiting around getting anxious and getting on the run before things heated up. Had a good swim: 14/123 in my AG.

The bike course ran down by Shearon Harris, Avent Ferry, 55, and came into Raleigh on Lake Wheeler. The first half was reasonably flat with rollers but the rollers turned into hills as we got closer to Raleigh. You had to stay on top of your gearing to get the right cadence and power (I was using a power meter to monitor my effort). Had a decent ride, averaging right around 20 mph. 23/123. 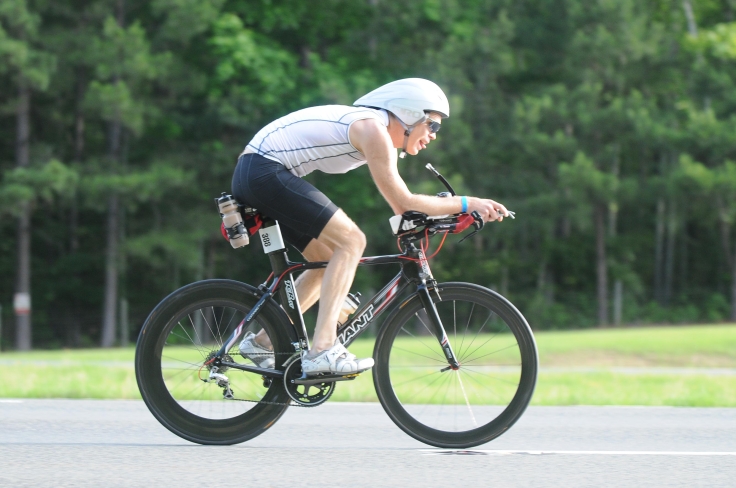 OK. For this race it’s all about the run, making sure your legs aren’t cooked from the bike to be fast but not playing it too conservative on the bike that you’ve got to kill the run hit the time.  I was going to break the half-marathon into 4 x 5k runs and target different paces for each. Here was the plan:

1: 8:15 pace‹get my legs off the bike and put in a solid effort since the first part of the course was uphill

Here’s how it unfolded:

2: 9:26‹well, so much for that plan and getting into a rhythm; the wheels are not off the bus, just a little wobbly

3: 11:00‹the wheels are definitely off the bus and I’ve got to push this f****ing bus home! We are officially in survival mode. No more pacing or planning or wishful thinking, just get to finish line without walking (too much).

4: 10:45‹A slight “kick” to get home (and I use that loosely). Just put one foot in front of the other and get enough composure to not be walking across the finish line; major leg cramping now.

As you can see, this was butt ugly. My PR this year for a half marathon was 1:35 so I was hoping for something 1:50ish.  Not a 2:08 gut punch! At one point a guy in my age group passed me and then started walking up the hill.  Ahah! He’s in my cross-hairs and I’ll take him on the hill.  HE OUT-WALKED ME AS I RAN UP THE HILL.  That’s how bad this death march was.

Meanwhile, Brett Smith, one of our partners in crime and a recruit for Team HammerCross had about the same experience, finishing 5:45.  But he made the race a little more special by nearly passing out at the finish and getting to recover in the medical tent (3 bottles of water and two IV bags later, he was smiling). For him, it was supposed to be race where he could work on race execution as he prepares for Ironman Wisconsin (REALLY big boy britches!).